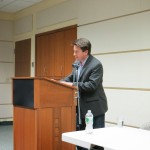 New Jersey has long been a seedbed of great American poetry. The writer often referred to as “The Poet of the American Revolution,” Philip Freneau, was graduated by Princeton and spent his last 30 years living in Monmouth County. Recently, three New Jersey residents received the Pulitzer Prize for Poetry within a four-year period (C.K. Williams in 2000, Stephen Dunn in 2001, and Paul Muldoon in 2003). North America’s largest poetry event, the biennial Geraldine R. Dodge Poetry Festival, for decades has taken place here. New Jersey gives to poetry and poetry gives back to New Jersey. 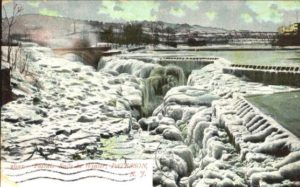 Yet, for all this rich history, there is no single quality that defines a Jersey poet. The Garden State has been home to poetic sensibilities as varied as oysters and pork roll—Stephen Crane and Toi Derricotte; Joyce Kilmer and Gerald Stern; Marianne Moore and August Kleinzahler. Running through all this variation, there is a lineage of Jersey poets that has fascinated and heartened me: those who found meaningfulness and a rough beauty among the disenfranchised. This line of poets begins with the great Walt Whitman (a New Yorker who called Camden home for his last 18 years) who wrote, “Whoever degrades another degrades me,” and continues with, among others, Allen Ginsberg, Amiri Baraka, Alicia Ostriker, and yes, Bruce Springsteen.

It was Springsteen’s words, burnishing the Seaside Heights boardwalk outside Lucky Leo’s arcade, that first resonated with the working class reality that swelled through my house and neighborhood (“Factory takes his hearing; factory gives him life”). But it was at Stockton State College that William Carlos Williams, 23 years dead, showed me how that reality could be played on the page without the benefit of lead and second guitars.

I grew up amid used car parts and S&H Green Stamp redemption items, things the writer Brian Bradford calls “blue collar heirlooms:” a toaster, a good can opener, a table lamp with a golden pull-chain. Williams’s poems were populated by things that this Jersey kid could relate to: a kitchen spigot, yellow drawn shades, fleas jumping from a dead cat, a fire engine “rumbling/ through the dark city,” and that red wheelbarrow, upon which so many things depended—even the grade I would receive for the term paper in that Stockton class.

The 1920s were a time when great American writers chose the expatriate life, living abroad in Europe. They dubbed themselves “The Lost Generation” and there are many accounts of the wild ride they were on, somehow depraved and somehow pure in intention at once. The likes of Hemingway, Fitzgerald, Eliot, Dos Passos, and others produced some of our nation’s finest early-20th century literature. As their demi-matron Gertrude Stein said, “Writers have to have two countries, the one where they belong and the one where they really live.”

But William Carlos Williams chose to live and write squarely in America. More specifically, he chose New Jersey, believing that where he lived was where he belonged. The son of an English father and a Puerto Rican mother (who was of French, Spanish, Jewish, and Dutch ancestry), he was born in Rutherford and returned after becoming a doctor to serve the people of his community. It was here that he helped manifest Modernism by asserting, “No ideas but in things” and offering up a multi-book epic poem in which he guides the reader in a search for meaning in the industrial town of Paterson, NJ—his response to Eliot’sThe Waste Land.

Although I was introduced to him in college, and even though he was a successful and beloved doctor, practicing for over 40 years in Rutherford, his poems are rebellious against tradition and the halls of power, almost angry even as they embrace the people who don’t normally find themselves in works of poetry. He was like an uncle I hadn’t known but liked immediately. And he appreciated the people I grew up with. As the doctor states in the opening paragraph of his story “Ancient Gentility,” “I got to love those people, they were all right.”

And while he served those around him as a doctor by delivering babies and tending to the sick, how many others of us he served through his poetry, which was disruptive and officinal at once. He taught us that, if we were good enough writers, we could pick up any thing and bang on it till an idea came out. He taught me not ever to refute my condition, but to sing it—that poetry, like America, is democratic, not a hierarchal system. Any voice can find a home in it if the person is willing to work to make an earned grace happen. Even the famous, quip-like note to get him out of trouble with his wife has the strength of an undercurrent in it:

and which
you were probably
saving
for breakfast

Forgive me
they were delicious
so sweet
and so cold”1

The double entendre of the last two lines is what is delicious here. Not only were the plums “so sweet/ and so cold,” but so is the note itself, left next to the emptied icebox. I can appreciate this loving ribbing. It reflects a certain attitude my family calls “Jersey fresh.”

BJ Ward’s most recent book, Jackleg Opera: Collected Poems 1990-2013 (IO Poetry Series/North Atlantic Books), received the 2014 Paterson Award for Literary Excellence. His poems have appeared in Poetry, The American Poetry Review, TriQuarterly, The Normal School, The New York Times, and The Pushcart Prize Anthology, among others, and have been featured on NPR’s “The Writer’s Almanac” and NJN/NJTV’s “State of the Arts.”